Metal Dome PCB Switches: What are They, What do They do?

A Definition of Metal Dome PCB Switch
Metal domes, also referred to as metal snap domes or tactile metal domes, are made of stainless steel, or manufacturers may offer gold plating when necessary. They are momentary switch contacts that become normally-open tactile switches when used in conjunction with a printed circuit board (PCB), FPC circuit, or silver flex membrane switch. Metal dome PCB switches may be divided into circular (round), four-leg, triangle, oblong, or custom shapes. Metal domes may be incorporated into a wide range of applications including mobile phones, test equipment, industrial controls, diagnostic equipment, and measurement equipment, among others. 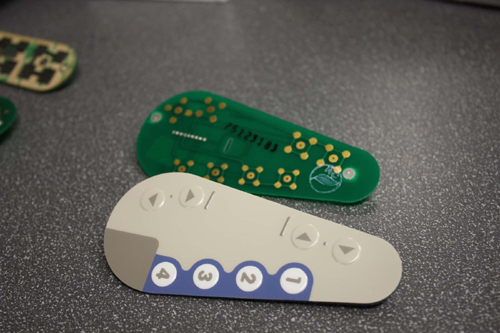 Circular  Metal Domes
Circular metal domes may also be called round metal domes or circle tactile domes. They are round in shape and can only be used in circuit boards of two or more layers or in a precision switch.
Applications requiring a low profile switch under a membrane overlay, or keypad, are perfect for circular metal domes. They also may be used in smaller spaces than four-leg domes and have longer life cycles than triangle domes.

Four-Leg Metal Domes
Four-leg metal domes, also referred to as four-leg tactile metal domes or cross metal comes, are four-legged domes designed specifically for mounting on single or double sided PCB’s, FPC circuits, and silver flex membranes where traces of negative and positive can be designed under the dome on the same side of circuits. Four-leg metal domes have a better clicking feel than round and oblong domes and have longer life cycles than triangular domes. In fact, the normal lifecycle of a four-leg metal dome is greater than one million. Four-leg domes often are higher in the z-axis than other domes and cost more as well.

Triangle Metal Domes
Triangle metal domes, also known as tactile metal domes, are triangular shaped metal domes designed for mounting on single or double sided printed circuit boards, FPC circuits, and silver flex membranes where a via is run through the circuit board. Applications requiring a click feel but limited to narrow space, such as small, handheld devices, are the best fit for triangle metal domes. Triangle metal domes can be used as heavy force control switches to avoid careless operation, since they can handle trip force of up to 6,000gf. Most triangle metal domes have two legs, or feet, that can be inserted into the hole of the circuit board, so they may be fixed on the circuit without any adhesive tape and are suitable for high temperatures. Soldering triangle metal domes’ legs on circuits is not recommended, as it reduces the domes’ lifecycle and click feeling.
Oblong Metal Domes
Oblong metal domes, also referred to as oval metal domes or rectangle metal domes, are oblong or oval in shape. These switch contacts are designed for mounting on double sided PCBs, FPC circuits, and silver flex membranes. Oblong metal domes are perfect for applications that require a low profile switch on an overly populated circuit board. They also may be used in long, narrow spaces that cannot accommodate other domes.
Custom Metal Domes
Various manufacturers have the ability to design custom metal domes to meet your application’s needs. These manufacturers will design, draw, and create samples to meet the custom size, shape, trip force, rebound/return force, or travel that is required.
Several membrane switch/circuit manufacturers utilize metal dome switch arrays to reduce cost and speed up assembly times. Operators place one large dome array in the application instead of
each dome individually to reduce production time. This also may lead to quality improvements and reduce placement errors or double doming. Dome arrays also enhance the tactile feel of a rubber keypad or are the answer to creating a tactile switch effect by sticking the dome array directly on a PCB. However dome arrays carry an additional cost vs. traditional placement methods.
Benefits of Metal Dome PCB Switches 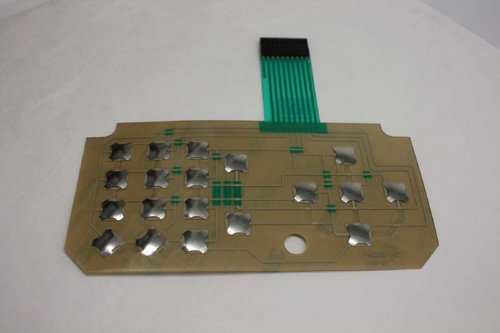 Venting Metal Dome PCB Switches
The movement of air in and out from under the metal dome is called venting. It is crucial to account for venting so your metal dome functions properly. Lack of venting can cause adverse effects on the switch’s feel and function. Venting domes is necessary in order for the dome to feel and work the way it is intended. A variety of ways to vent metal domes are available from manufacturers, including vent channels from dome to dome via a space layer, dome arrays that are top vented through the polyester material, and vent channels that go through the board.